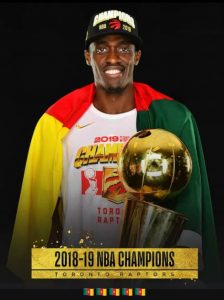 The President of the Republic of Cameroon has sent a message of congratulations to Toronto Raptors’ forward and Cameroonian international Pascal Siakam.

This is seen hours after the young Cameroonian basketball star helped United States based basketball club Toronto Raptors won this season’s NBA Champoinship one of the most competitive and prestigious basketball competitions.

The message came through a tweet posted on the President’s official tweeter account @PR_Paul_Biya. States ” I commend the performance of our young compatriot Pascal Siakam @pskills43 who has won the #NBA Champoinship.

He incarnates the youth that makes the pride of all our compatriots. A Cameroonian youth that partakes in the blossoming of the country.”

Pascal Siakam celebrated his first NBA Champoinship title with the flag of his Homeland , Cameroon draped over his shoulders.

The Toronto Raptors star in a post match interview expressed his delight at lifting the Champoinship trophy says ” he hopes his contribution to his team’s victory will help to inspire young Africans” also that ” it’s a dream and it feels amazing to realize your dreams.”