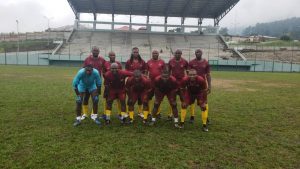 Buea-based veteran club Sunday Friends Association, SUFA, continue their winning streak as they gear up preparations ahead of the Buea Veteran Tournament for Peace.

SUFA on Sunday, June 16 edged Star Veteran of Buea in a friendly that took place at the Buea Municipla Stadium.

The encounter that saw FUSA tailing after Star Veterans have opened the scoring from a penalty spot, saw the one time champions of the National Veteran Tournament using all their arsenals to level the scoreline.

With few minutes after they conceded the goal, a perfect combination from former Mount Cameroon FC skipper Atem Valentine Fondongbeza saw him dishing a decisive pass to Yanku Dieudonne who slot it in to make it 1-1.

Despite their morphology of pot bellies, SUFA showed some class in their play style as they punished Star Veteran players to chase more of their shadows than the ball.

The first segment will end with a parity scoreline of 3-3 with Joseph Eyong and Atem Valentine all scoring for SUFA.

In the second segment of the encounter, SUFA continued their dominance but failing to concretize most of their chances.

Star Veteran continue to sit in their own half of the pitch while relying on counter attacks to see that they penetrate the back four of SUFA.

However, SUFA finally got the winner after a solo action that saw Mokoko Kenneth scoring a sublime goal to make it 4-3 for SUFA.

With the game coming to an end, SUFA was able to survive the scare from Star Veteran to maintain her unbeaten record.

At the end of the encounter, SUFA’s midfield maestro who doubles as President Jumuton Jerry Fombon voted Man of the Match.