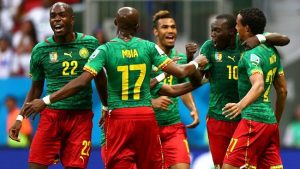 Ahead of the commencement of the 2019 African Cup of Nations, AFCON, the Indomitable Lions of Cameroon staged another bonus dispute with soccer officials of the country.

There have been many of such bonus fights in many sports disciplines in Cameroon, from handball, basketball, volleyball to the most cherished sport in the country, football.

Despite the recurrence of these situations in the country, a panacea for the stigma is yet to be discovered.

Since leaping into the soccer limelight in the 1990 till date, the tug-of-war between the Indomitable Lions and officials of the Ministry of Sports and Physical Education and the Cameroon Football Federation, FECAFOOT, has been a recurring phenomenon.

Cameroon’s preparations for most international competitions are often marred by the bonus virus.

In his book, Elephants, Lions & Eagles, Filipo Maria Ricci, asserted that: “In 1990, the man who was supposed to distribute the bonuses for the Lions’ fantastic World Cup, ran away with the money, leaving the players empty-handed,”

There is also another dispute which has become known today as the Marrakech Incident in which the then Skipper of the National Team, Samuel Eto’o Fils, was suspended for spearheading the strike action.

Cameroon’s debacle at the 2014 World Cup was partly due to the issue of bonuses.

The Lionesses just like the Lions have also had their own fair share of the bonus dispute.

The recurrence of the bonus quarrel in Cameroon forced President Paul Biya to sign a decree on September 27, 2014, stating that for every major competition, bonuses and participation allowances are supposed to be stated months ahead of the competition.

Despite the Presidential prescription, the bonus virus continues to plague Cameroon.

The Cameroon Government is partly to be blame, considering FECAFOOT is seen as a Government entity and not independent.

Unlike in other countries where the Football Federation is independent and runs its affairs without Government intervention, the situation in Cameroon is different as it is mostly the Government that hires and pays coaches, players and other stakeholders in the team.

In some cases, there have been conflicts between members of FECAFOOT and those of the Sports Ministry, which usually contribute to these bonus disputes since both parties are always at war.

There have been situations where the Ministry dictates, while ignoring the opinions of FECAFOOT officials, who are technicians in football management.

Meanwhile, FECAFOOT officials have been accused of incessant greed. This is one of the reasons players behave poorly and at times keep patriotism away as they know they are covered by what they call ‘football godfathers’.

The lavish life styles of FECAFOOT officials during competitions paints a picture of what is describe in Pidgin English as “Monkey di work, baboon di chop”. This has made the players to believe that there is always money but the players who are the real actors are given crumps, while the officials enjoy from their sweat.

The disorganisation at the level of FECAFOOT has been a cause for concern.

This is one of the reasons the bonus disputes keep reoccurring. In all, there is a lack of effective communication and a complete absence of genuine trust between the team and FECAFOOT officials alongside the Government.

The players will also take their own share of the blame at the level of lack of patriotism.

To some pundits, the action of the players is seen as evidence of their greed, selfishness, lack of patriotism, which is at variance with modern footballers. The players are always fast to raise the issue of bonuses.

However, with the Lions now in Egypt, many are hoping that the soccer infantry of Seedorf will keep their bonus dispute aside, just like in the 1990 World Cup, the 2017 AFCON and defend the colours of the country.