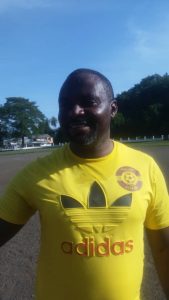 The six months old club produced a solid display in the final of the Fako league at the Limbe Centenary stadium with Heliens Ndi Chaibula’s second half goal proving the difference as Options Sports Academy were crowned champions of Fako Divisional Football championship.

President Henry Neba’s boys genuinely scared oppositions this term and he insists trading on history not results or performances will never become the club trademark.

It’s such a frightening prospect and right now the President is enjoying the moment.

” This season has been full of wonderful moments, wonderful moments together. Looking forward to games, enjoying games and Sunday was like the icing on the cake” Henry Nejust-concluded just concluded campaign has been far more than the pursuit of trophies but demonstrating the club genuine credentials.

” A moment like this is worth more than silverware”.

Options Sports Academy will take part in the Southwest Regional championship next season and the President insists the club inelastic appetite for glory is visible even for the blind to see.