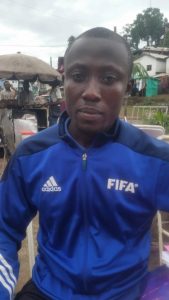 His developing charges have handled the weight of expectation on their shoulders this term and finishing top of their group was a strong statement of intent that the championship is no longer a luxury.

” It’s a great feeling so far and we are happy to be in the last four of this competition.We want to keep doing the exploits.We come to the playoffs to play for pleasure and to perform better each day and progress in our formation process” coach Edwin Teteh explained.

While majority of clubs in the division heavily invested during the off season the inspirational soccer tactician has given breath to the footballing careers of some of academy exciting lads and his flamboyant charges continue to defy all odds across all competitions.

Sports scientists hold that NQSA are indeed a completely rejuvenated side under his mentorship.

” We are at this level not because we have the best players in the division.Hardwork and the constant progress of trainees have laid a solid foundation” he added.

Recent results have inspired confidence building at the club.

The mental approach of his players, the pragmatic touch of the technical staff, behind the scenes inputs of President Henry Njalla Quan Jnr and God’s providence have oiled the wheels of progress.

However, coach Edwin Teteh insists the academy will not change its philosophy to chase glory but the coach believes there is a sense of optimism going into the future.

Coach Edwin Teteh is refreshingly realistic ahead of the Southwest Regional league playoffs as he has noted that NQSA are going into the tournament as underdogs but with potentials to cause a major upset.

The Limbe based outfit were not the bookies favourite to reach the last four of the competition this season but doubters amongst the fan base are now convinced that the mandated target has been attained.

” As an academy we have achieved our ambition this season and have done more than expected and it’s thanks to God and all those who played key roles in writing this chapter of our history” Coach Edwin Teteh emphasized.

NQSA will open their Southwest Regional playoffs account against PWD of Kumba on Saturday, June 13, 2019.