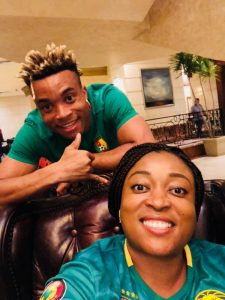 Pierre Kunde Malong rapid rise to stardom is thanks to a perfect footballing education and he can credit his family in particular for his development, his elder sister has revealed.

According to Metuge Marie Malong the family worked to instill in the box to box midfielder a unique mentality that ensure he would never be phased by step up quality.

” It was about getting the environment right, balancing his school work with training. It was all about treating him in the right manner and picking and choosing when it was right for him to be involved with football and when it was right correct for him to concentrate on his studies at school” she explained.

Kunde Malong late father was his first coach and he aided his development at home.

He immediately stood out within his age group at Best Stars Academy of Limbe, leafflogging a host of players at the academy to force his way into the first team.

” He has an inner confidence without being brash or flash from our late father. He is very hard working. Indeed on and off the pitch he is a class act without being a show off,” Metuge Marie added.

His achievements are a source of overwhelming pride to his family and his elder sister is extremely happy the Cameroon international is a long way from being the stereotypical footballer.

” Kunde has a humble and quiet demeanor but that changes as he enters the pitch. He becomes vocal and physical, impressive leadership qualities” she outlined.

Born and raised in Kie Village, a place not renowned for spitting out brilliant talents. Kunde Malong is the last in the family of six. Metuge Marie Malong shares stories of his modest upbringing.

Sharing a room with his siblings and she believes his humble beginning certainly did him well in his pursuit of excellence.She has no doubt his kid brother will continue to earn rave reviews.

” I have no hesitation in predicting that Kunde will become a top, top player because he has the right altitude and desire to learn so as to match his undoubted desire,” she emphasized.

The former Best Stars Academy product’s fortunes have soared since he joined Bundesliga powerhouse Mainz in the summer of 2018.

His ambition burns brightly and he wants to excel at every level of his career.

” What has elevated him in the eyes of fans and neutrals is his respectful nature, energy and positivity and that smile.For somebody with such confidence in his abilities its rare”.

The stocks of Kunde Malong have risen on the international stage. At the 2019 Total African cup of nations he was voted the Man of the match when Cameroon against Benin during the group stages.

Metuge Marie Malong said she wept from the stands after realizing her brother has landed the accolade.

Memories of her late parents ran across her mind. She is conivince Babey Nicolas Malong and Marthe Louise Gisel are proud of what their son has become.