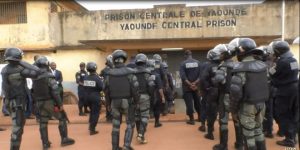 Hundreds of people marched in Cameroon’s capital, demanding to know the whereabouts of imprisoned relatives who were moved to unknown locations last week after a riot inside a large Yaounde jail.

The prisoners were moved after a riot in the Kondengui Central Prison on July 22. Detained separatists from Cameroon’s English-speaking regions and jailed opposition members took possession of the prison yard to denounce overcrowding, deplorable conditions and lengthy trial delays.

The government says that after the riot, about 250 prisoners were moved. Separatists on social media gave the government five days as of last Wednesday to disclose where the detainees were or face the consequences.

On Monday, they said they had been informed that 88 of the English-speaking inmates were in a cell in Yaounde. The location of the others was not disclosed.

Government spokesperson Rene Emmanuel Sadi says the inmates were taken out of the Kondengui prison because of the role they played in the riot, in which part of the facility was torched and many inmates injured.

“The inmates identified as being the leaders on this insurgency, 177 people on the day of the event and 67 thereafter for a total of 244 insurgents, have been handed over to the police and gendarmerie services for questioning,” Sadi said.

He added that some of the inmates were in more secured detention facilities in Yaounde while others were moved elsewhere to make the prison less congested.

Denis Nkemlemo, spokesperson for the main opposition political party, the Social Democratic Front, says by keeping the prisoners beyond the reach of family members and friends, the government is aggravating the crisis in the English-speaking regions.

Armed groups in the two regions have fought to separate them from majority French-speaking Cameroon since 2017.

Rights group Amnesty International has called on authorities to improve the grim prison conditions, release anyone detained only for peaceful protest, and ensure that every person held past the legal period of pretrial detention goes before a judge immediately or is released.