The management of Southwest Regional League side Buea United FC has confirmed a four-year deal for Emmanuel Agbor aka Alabas to be at the helm of the club.

Going by reports from Buea United FC, Coach Alabas will be in charge of recruitment of players.

According to this, he will scout for young talents between 14 to 18 years to boost the club’s nursery. 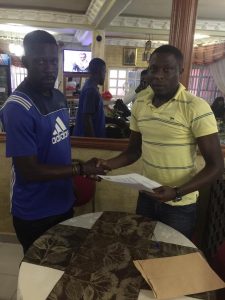 The major objective for the gaffer will be to qualify the club to represent the region at National Interpool as the club looks forward to making history.

This is in line with the objectives of the club set by its El Supremo, Valery Kadji.

Last season,  when Coach Emmanuel  Agbor took over from Enang Severin, he  turned the table guiding Buea United to back to back wins.

A last day draw away in Tiko saw them narrowly missing a spot at the Southwest RegionalLeague Mini Interpools.

The club is yet to announce the commencement of the new season.