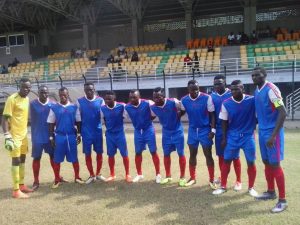 They became South West champion after surpassing Njalla Quan Sports Academy, Limbe Football Club Association and Continental FC during the Regional Mini-Interpools in Limbe that ran from July 13 to 20, 2019.

In PWD’s first match played in Limbe against Njalla Quan Sports Academy of Limbe on July 13, 2019, both teams shared the points on a score of one goal each. On day two, played at the Molyko Omnisport Stadium, July 16, 2019, PWD earned a well-deserved win against Limbe Football Club Association (LIFCA) thanks to an early goal from their prolific striker, Namse Ebile Kelson, at the 9th minute from a penalty spot.

PWD picked up their ticket to represent the South West on July 20 when they eased pass Continental FC Buea by 3-0 in Limbe to book their place in the national Interpools. To ensure victory at the national Interpools, the President of PWD Kumba, Bisong Enow Maxwell, told Cameroon Tribune that the population of Kumba is already being mobilised to throw their weight behind the team.

“I had a meeting with some elite and sport lovers in Meme Division and they are passionate to give their support,” he said. That the team officials also had talks with the Senior Divisional Officer for Meme Division who promised to appeal for support from the population for PWD Kumba in whatever way they can.

Bisong Maxwell also indicated that Prince Ndoki Mukete was to have a live show on Lake Side Radio on Saturday August 3, 2019, aimed at galvanising more support for the Meme club. Sylvester Esowe Muambo, Secretary General of FECAFOOT South West indicated that PWD Kumba came into the competition as underdogs and took all the regional football power houses by surprise.

Now that they are into the National Interpools, PWD Kumba is not just a club from Meme but a flag bearer of South West. As such, FECAFOOT South West has put in place all technical, moral, financial and material aspects for PWD Kumba to ensure that they qualify for L2 Championship.

Namse Ebile Kelson of PWD Kumba emerged top goal scorer with four goals to his credit during the tournament.

The team coached by Basil Forgu Forteck and Ayuk Takang will be counting on the experience of team captain Bibish Abane, Bertrand Nkah, Moise Itua and goalkeeper Clinton Fule at the National Interpools.