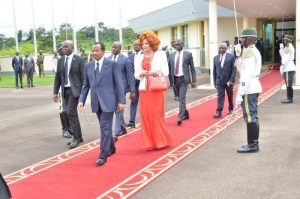 The Africa Report | Paul Biya is playing a tactical masterclass. From the release of opposition leader Maurice Kamto and Anglophone militants, to the conclusions of the Great National Dialogue, the Cameroon president is hoping to avoid letting the federalism genie out of the bottle.

Tired but beaming, Prime Minister Joseph Dion Ngute hands out a few bottles of Guinness to his colleagues on the first floor of the Palais des Congrès.

There is no palm wine to mix with it, but the head of government wants to celebrate the end of the “Great National Dialogue”, which took place from 30 September to 4 October in the palace grounds. It was Dion Ngute who had welcomed the participants, eased tensions and overcome disappointments during the course of the five-day debate.

“This is a real political victory for him,” says Christophe Mien Zok, spokesman for the ruling party, the Rassemblement Démocratique du Peuple Camerounais (RDPC).

Since President Paul Biya’s speech announcing the dialogue on 10 September, Dion Ngute had worked closely with the party, whose recommendations were designed to ensure the dialogue would not deviate from what the head of state wanted: a return to peace, and decentralisation.

On the first night he had to make a concession and allow the commission on decentralisation to discuss federalism – which the organisers had hoped to avoid.

Meanwhile, there was the disturbance caused by Sultan Ibrahim Mbombo Njoya, an old companion of Paul Biya, who called for a limit on the number of presidential terms and political alternation.

Biya was not in the room but he had his eyes and ears in the form of presidency official Ferdinand Ngoh Ngoh and several members of the intelligence services.

Until the last moment, Ngoh Ngoh and the minister of territorial administration, Paul Atanga Nji, were reluctant to engage in the dialogue, preferring to take a tougher line towards the opposition – notably Maurice Kamto, who was released on 5 October – and the Ambazonians. The two men watched Dion Ngute’s ascent with a cautious eye.

But it was difficult to ignore Paul Biya’s support for his prime minister. The latter held tight to the reins and, on the closing evening of the debate, the two key – but vague – recommendations were in place: increased decentralisation throughout the country and a special status for the North-West and South-West regions.

“It was a success,” says Simon Munzu, a diplomat at the United Nations. “The government admitted that there was an Anglophone problem and let the participants discuss federalism. Even if the solution was rejected, it took the sting out of the concept.”

But what can we expect from the recommendations transmitted to Paul Biya, who will implement them “according to their timeliness and feasibility”?

“Giving special status to English-speaking regions means recognising their heritage, particularly in terms of the school and legal systems,” explains a ruling party official, who also cites the possible restoration of an “Assembly of Anglophone leaders”.

“We are moving towards greater decentralisation – quite close to federalism for the Anglophone regions,” says a Cameroonian political scientist. “Management of their own separate justice and education systems, as they did until the reunification of 1972, election of a regional authority with real powers and the restoration of an Assembly specific to the two Anglophone regions.”

Biya, however, has not gone as far as federalism, which he still sees as “a Pandora’s box”, in the words of one of his close advisers. But the president has, on the surface at least, made concessions. “He had two problems: one national, which he wants to solve through decentralisation; the other Anglophone, which he thinks he can solve with a special status,” the source continues. Will Biya follow the recommendations?

The measures must be implemented in the coming weeks

He is a master of timing. “The measures must be implemented in the coming weeks,” says one executive in the ruling party. “Since 1996, Biya has been talking about decentralisation, but nothing has ever been done,” recalls a sceptic. Why believe in it today more than yesterday? “With the Ambazonians, we’ve been backed into a corner,” a party member confides.

In Yaoundé, everyone is breathing out after what they see as a close call. But there’s a huge job ahead. The next parliamentary session, usually devoted to the state budget, is scheduled to open in early November, and legislative and municipal elections are scheduled to take place in February 2020.

“MPs must follow the president’s lead, and the administration must not, as in the past, delay in passing laws,” RDPC spokesman Mien Zok insists. From the ministries to the tables of the capital’s restaurants, everyone is waiting for the next speech from the Etoudi Palace’s long-term tenant. “He can save his presidency by being pragmatic and giving up some of his power to the regions,” says a source close to Biya. But will his (so far hypothetical) pragmatism be enough?

The Anglophone conflict is far from resolved

For the Ambazonians, who refused to participate in it, the national dialogue was a non-event. “This monologue was nothing but a PR operation,” says Herbert Boh, one of their leaders in exile. On 7 October, a new “dead city” operation was organised by the secessionists in the North-West and South-West regions. It was a success.

“It will take more to win back the trust of the people and isolate the fighters. How can we expect to resolve this crisis in five days of debates that were written in advance?” confides a diplomat based in Yaoundé, for whom the release of separatist leader Ayuk Tabe is essential. “Even if Biya decided to take military action, hoping that the population had shifted to his side, it could not win against this guerrilla group.”

A more ambitious dialogue with Anglophones and Ambazonians is needed

“Youth in the North-West and South-West are becoming more and more radical. We need a more ambitious dialogue with Anglophones and Ambazonians on the form the state will take,” says Léonel Loumou, adviser to Akere Muna. On 2 May, Tabe’s birthday, a prayer was uttered in his Yaoundé prison: “May the Lord free us, bless us and free our lands from foreign occupation.”

There is not much to be optimistic about. Especially since old political habits in Yaoundé still linger and could once again stop any change. “If we could have had a tenth of what the Anglophones have, we would have signed,” says an angry political leader from the Far North, who went so far as to claim “another special status” for his region.

“This is a perverse effect of the debate, and a way for some French-speaking leaders to block the implementation of the recommendations,” says one of the presidency regular. On the shores of Lake Yaoundé, overlooked by the white residence of the Prime Minister, rumours of reshuffling are already causing friction. In some villas in the heights of the city, the ballet of the ambitious has begun, while the elders are trying to ensure that their privileges are maintained.

For those who do not have Paul Biya’s ear directly, the long nights of uncertainty have begun.

The tactical president, never better than in these troubled waters, will have to box clever: give to the English-speaking peoples without offending the other regions and open the government to the opponents who participated in the dialogue (Joshua Osih, Cabral Libii or Serge Espoir Matomba) without angering the CPDM.

However, in this political version of the songo, Biya is in the “expert” category.

On 5 October, the day after the dialogue ended, the President, to almost everyone’s surprise, officially dropped the charges against Maurice Kamto and the leaders of the Mouvement pour la renaissance du Cameroun (MRC). “Biya buried the dialogue by focusing attention on Maurice Kamto. Liberation is a good thing, but it will be less so if it allows the head of state to shelve the resolutions of the debate,” says a member of the MRC.

“Biya has bought time and given pledges to the United Nations and foreign powers. It is in the coming weeks that we will know if it was only a diversion,” said one diplomat.

On October 8, as Maurice Kamto reconnected with his family and followers, Paul Biya landed in Lyon, France. His first official trip abroad since his hasty departure from Switzerland in July under pressure from a rebellious diaspora.

He met with his counterpart Emmanuel Macron, who called for the early implementation of the dialogue’s recommendations. After a year of turmoil, the sphinx of Etoudi is facing scrutiny from all sides.

But he is in charge again. For better or for worse.