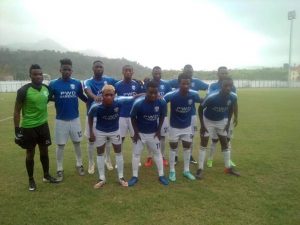 The participation of PWD of Bamenda in this year’s League One Championship remains in doubt as a recent decision from the Cameroon Football Federation, FECAFOOT, stated that Astres will be maintained in the League at the detriment of the Abakwa Boys.

Decision number 22/FCF/CR/2019 taken by the Appeal Commission of FECAFOOT on September 4 and made public on social media overrode an earlier decision taken by the Homologation and Disciplinary Committee of the Cameroon Professional Football League, LFPC, on June 14.

On June 17, the LPFC Homologation and Disciplinary Committee deducted three points from Les Astres of Douala. This was after their findings showed that they had fielded an ineligible player in their match against New Stars of Douala.

The player in question, Eric Tangi Atoh, was suspended for two years.

Due to the fact that the protest of New Star was judged inadmissible, New Stars does not gain any point on the general classification table.

Meanwhile, PWD and Astres after registering a 0-0 tie in their head-to-head clash were separated by the number of goals scored, since they had equal goal difference.

This gave PWD an advantage to escape relegation with seven points alongside Fovu of Baham and Union of Douala with 10 and 8 points respectively.

However, a list on social media on League I clubs that have collected subventions from FECAFOOT for the new season has the name of Astres on it.  This triggered widespread condemnation from the management of PWD Bamenda with its President, Pascal Abunde, issuing a press release calling on the fans to stay calm as everything will be put in place.

Things later took a new twist when Northwest Professional League clubs threatened to quit the National League. In a three-page-document signed by the Presidents of YOSA, Foncha Street FC and PWD Bamenda, the clubs pointed out that the decision of FECAFOOT is a “ploy to send out clubs from Northwest and Southwest from the League”.

The Presidents of the clubs said such acts only go to confirm the gross marginalisation of Anglophones by their Francophone counterparts.

The clubs Presidents also said PWD has not been handed its own cheque to start preparing for the new football season.  “This is a conspiracy to oust the club from the competition.”

The recent publication of fixtures for the upcoming season has the names of both PWD and Astres in the same fixtures as they await a final verdict on the case.

Cameroonians have taken to the social media to make a mockery of the situation with statements like “A new team by name PWD/Astres has been promoted to play in Cameroon’s top flight league.”

Others say “it is a united team (Franco-Anglo) in order to show the level of bilingualism and living together in the country. Surely it is one of the achievements from the National Dialogue.” These and many other derogatory utterances have characterised the PWD-Astre soccer saga.

Meanwhile, both clubs continue to prepare for the upcoming football season that will kick-off on Friday, October 18.