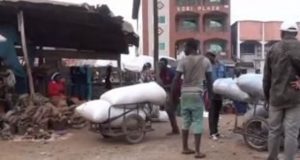 YAOUNDE, Nov. 10 Xinhua  | At least one student of the University of Bamenda in Cameroon’s troubled English-speaking region of Northwest was killed and eight others kidnapped by gunmen on Sunday, according to local authorities.

Local police said, the student was shot dead when he resisted to be taken away by the gunmen who arrived the students’ hostel early Sunday.

University authorities have condemned the killing and demanded for the “immediate and safe release” of the eight abducted students.

Police blamed armed separatists for the abduction but separatists have denied responsibility.

Separatists have vowed to stop schools from operating in the crisis-stricken Anglophone regions of the country if “inclusive dialogue and ceasefire” is not initiated to stop the conflict.

Majority French-speaking Cameroon is facing a prolonged separatist conflict in its English-speaking regions of Northwest and Southwest, where separatists want to create an independent nation.

The conflict that started in 2017 has displaced over 530,000 people, according to the United Nations. Enditem