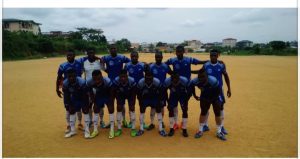 The Coach Emmanuel Agbor’s side bounced back to winning ways as they humbled their host Saint Julio in a pre-season friendly ahead of the Regional Championships.

With the clubs playing two games the same day, the first encounter saw Buea United FC, BUFC, beating Saint Julio 3-0.  Meanwhile, in the second mouthwatering encounter, it was BUFC that continued their dominance by edging their host 1-0.

This gives an aggregate of 4-0 in the encounter between these two regional championship sides.

The result means BUFC are back in winning way and also kept their first clean sheet in their last four games.

Speaking to reporters after the game, Saint Julio Technical Director, Joseph Ekedi Ngando congratulated BUFC for their victory. He went further to say that the defeat suffered by his side will rather motivate them to prepare better this season.

As to the club’s objective this season, Ekedi Ngando said the club is determine to pick a League Two ticket this year. This he said they will have to intensify their training.

Meanwhile, Buea United FC will take their preseason tour next week to Limbe where they will face Njalla Quan Sports Academy, NQSA, and Best Stars Academy of Limbe.