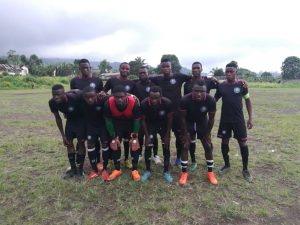 Buea United FC was held at home in their preseason friendly by Mount Cameroon FC after a 1-1 tie in a mouthwatering encounter that took place on Friday, November, 22.

It was the visiting Mount Cameroon FC that breaks the deadlock from the penalty spot after team captain Ebong was able to beat Sammey to give his side the lead.

Despite playing at home, the boys of Coach Emmanuel Agbor aka Alabas showed so much lack of steam and cohesion to the detriment of the Buea United supporters.

The game ended on a 1-1 tie. Buea United FC will travel to Tiko where they will face Little Foot FC on Friday, November 29.