The maiden edition of the BONAVADA Christmas Holiday Football Championship Kicks Off commenced on Sunday, December 23 at the Upper Bokova Community Field with.

However, in the main category, it was visiting Bova United FC from Bova 1 and 2 villages that stunned the home side Bokova Young Stars FC 1-0 in a highly contested encounter.

Despite playing at home, Bokova Young Stars failed to shine as it was the united Bova side that rather played as if they were at home. 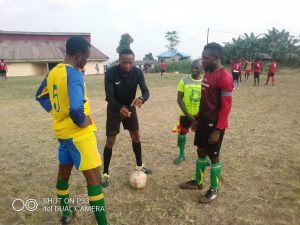 Going by the organiser Mbua Emmanuel Mbua, the objective of the tournament is to promote friendship, unity and solidarity, keep youths away from negative practices such as drug abuses, sexual promiscuity, to give exposure to hidden football talents and for the youths in the community to have fun amongst others.

It features clubs in both the female and male categories. The female category is made up of three clubs: CYF Ladies of Bokwai, Gentle Ladies of Bova and German Ladies FC of Bonakanda village.

The tournament is scheduled to run for a period of two weeks that is from December 23 to January 5, 2020.