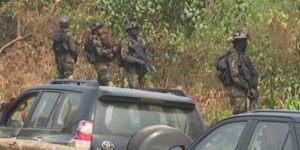 The children were kidnapped early Tuesday from their school in the southwestern city of Kumba and “taken to the forest where the camp of the separatists is located,” Ntou Ndong Chamberlain, senior officer of Meme division, told reporters Tuesday afternoon.

Two armed separatists were shot dead during the rescue operation and weapons and ammunitions were found, the official said.

The children, aged five-10, have been reunited with their families, he added.

Abductions have become rampant in the northwest and southwest Anglophone regions of Cameroon as general elections draw near.

Armed separatists have been clashing with government forces since 2017 in an attempt to establish an independent nation in the two regions. Enditem