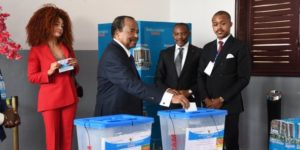 YAOUNDE – Claiming massive fraud, Cameroonian opposition political parties are calling for the results of the February 9 local elections that gave the ruling People’s Democratic Movement of long-serving President Paul Biya a landslide victory to be discarded. Meanwhile, results of the parliamentary polls are still expected.

Denis Kemlemo, spokesperson of the opposition Social Democratic Front, says his party has petitioned the constitutional council to totally discard the results of the February 9 local and national assembly elections, which he says were characterized by many irregularities.

“Among some of these reasons is massive fraud, corruption of voters. Troops sent from other regions voted on behalf of the local population,” he said. “Other reasons include gun violence, low voters participation, and there were also a lot of threats, which made some candidates to even desist or withdraw their bids.”

Kemlemo said besides the petition submitted by his party, individual candidates had also asked the constitutional council to ignore the elections in their constituencies. He said some of his party’s candidates were scandalized that troops the government said it had sent to the English-speaking Northwest and Southwest regions to protect civilians from separatist fighters who had vowed to disrupt the polls were instead stuffing ballot boxes to favor the ruling CPDM party. The military has denied the allegations, saying troops were there solely for security.

The constitutional council said in a release that 22 parties, including the National Union for Democracy and Progress, the United Democratic Party, the Cameroon Democratic Union and the National Salvation Front, have filed petitions asking for either a partial or total cancellation of the local polls the ruling CPDM party of president Paul Biya won with a landslide majority.

The results also indicate that less than 30% of the close to 8 million voters actually voted, and voter participation in the English-speaking regions, where separatist fighters had promised to disrupt the polls, was less than 10%.

The CPDM party has called on supporters to respect the verdict of the elections as announced by competent authorities.

Motanga Mojimba, a CPDM candidate who was declared a winner, says his party is already thinking of what to do to improve living conditions in his district.

“I dream everyday to see this Limbe become like the city of Marrakesh [Morocco]. When you look at the town of Marrakesh, it is well-planned. Their houses have one color and that is the more reason why when we came back from Marrakesh there has been a constant attention paid on street lighting and that has gone a long way to keep our town secured. We have been assisting communities to give them pipe-borne water, the building of an ultramodern market to make it look like what we see when we move out of this town to other countries,” he said.

Georges Elanga Obam, Cameroon’s minister of decentralization and local governance, says the government is ready to start providing funds for elected local officials to go to work immediately. He says Cameroon’s law on decentralization, adopted by Parliament and promulgated by Biya in December gives greater autonomy and powers to local councils.

“It was the state intervening in the roads, in education, in the health and the creation of hospitals and schools, now mayors have the power to recruit people in health centers” he said. “They can even create schools. These are real powers that have been given to them, but having the state overseeing what is done.”

The constitutional council says it is already examining petitions forwarded to it by political parties and candidates, and that public hearings will be held in coming days.

Results of the parliamentary election for the National Assembly, the lower house of the parliament, will be announced by March 1. The electoral law gives up to 20 days after the polls for the constitutional council to announce the results.