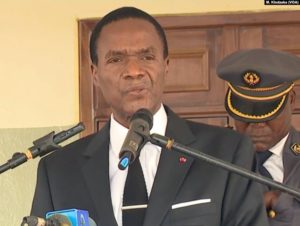 APAnews  | The Cameroonian Ministry of Defense, on Monday denied “allegations” attributing the massacre of civilian populations on February 15 in the village Ngarbuh (North West) located in the country’s English-speaking area, some 450 kilometers from the capital, Yaoundé.

In this document signed by the head of the communication division, Captain Atonfack Guemo, the government talks about “an unfortunate accident, a collateral consequence of the security operations underway in the region.” He also denounces “an act of inhuman cruelty which certain propagandist activists attribute to the armed groups and the defense forces,” and which “is said to have resulted in the death of several people, including women and children.”

According to the Ministry, it is a group of six elements of the army who, on Friday, informed by repentant secessionists, carried out a night reconnaissance on a residence “transformed into a fortified camp, a real logistical base of illicit goods, receiving arms and ammunition of all calibers, and stockpiling and reselling narcotics.” Caught by heavy fire from secessionists hiding in the shelter, the patrol’s response resulted in the “disarming of seven terrorists.”

The battle thus ended, Atonfack Guemo said, after the explosion of several fuel containers, followed by a violent fire, which affected some nearby houses,” killing five people, mainly woman and children.” This statement is very far from what is said in social networks and which, for the sake of this gruesome staging, publishes old images of the neutralization, during 2019, of four terrorists in the North West, including a woman.”

The government also announces the immediate opening of an investigation on the subject by the gendarmerie and military security, the conclusions of which will be widely disseminated.

A few hours prior to this official reaction, both the main organizers of social networks on the English-speaking crisis and the privately-owned media, were undecided as to the origin and the perpetrators of the Ngarbuh-Ntumbaw massacre, during which, according to some sources, between 20 and 35 people were killed.