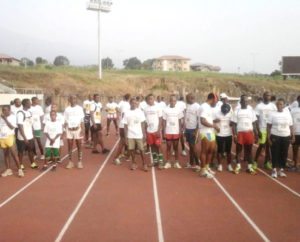 Some 550 athletes are gearing up to take part in the 25th edition of the Mount Cameroon Race of Hope which will take place on Saturday, February 22.

The race will see local and international athletes climbing the mountain to set records and challenge last year’s winners, Eric Mbatcha and Carine Tata who both won the race in the male and female categories respectively.

The 550 athletes that will be taking part in the race have been partitioned in the senior category, juniors and also the veteran category.

The Senior category has a total of 331 athletes made up of 45 women and 286 men.  Meanwhile, in the Junior category, they will be 76 athletes including 28 females and 48 males. For the Veteran category, some 143 athletes will take part in the race with a total of 26 women and 117 men.

Also, the race will have seven international athletes from Kenya, five from Zimbabwe, two from France and the Central African Republic each while Uganda and Niger are represented by an athlete each.

In all, a total of 99 women and 451 men will take part in the race with some 18 international athletes amongst the 550 athletes.

The race has Just like last year, the winners of the senior categories (male and female) will take home the cash price of FCFA 10 million.

The population of the Southwest Region are optimistic that this time the region will shine at the Mount Cameroon Race Of Hope. The Race has witnessed serious Northwest hegemony, especially in the female category.

In one of her interviews to The Post last year, The Queen of the Mountain, Sarah Liengue Etonge, has lamented the domination of the Mount Cameroon Race of Hope by female athletes from the Northwest Region and asserted that those in the Southwest Region are not brave enough to challenge the Chariots of the gods like in the yesteryears.

Emilia Mojoko Ngonja won the race thrice (1983, 1985, and 1986). In 1984, Sarah Njie Ewelisane became the second female athlete from the Southwest Region and the second Cameroonian lady to win the race.

Three years after, Christina Embelle Etonge won the race in 1987 and 1992 fly high the Cameroonian flag in the Mount Cameroon race of Hope amid foreign domination.

Despite this, The Secretary-General of the Southwest Athletics League, Roger Nlemba, is optimistic that this year’s Mount Cameroon Race Of Hope will be an avenue for athletes in the Region to excel.

“After what I saw here during the Test Race, I am confident that athletes from the Southwest Region will be among the best in the race,” Nlemba said.

This was corroborated by the President of Southwest Athletics Federation, Andrew Eteki Njoh.

The question of who will overthrow Mbatcha Eric and Tata Carine in the Senior category and Tume Macrita Yunyuy and Mentang Cornelius in the Junior category will only be answered on Saturday, February 22.