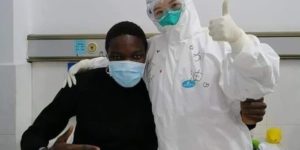 The EastAfrican  | Cameroon’s President Paul Biya on Thursday ordered the state to urgently disburse FCFA 50 million ($82,306) for the upkeep of Cameroonians in China following the coronavirus outbreak.

About 300 Cameroonians are in Hubei province, 200 of whom are in its capital Wuhan, the epicentre of the Covid-19 virus epidemic.

This will enable the Cameroonian embassy in Beijing, to provide assistance to its citizens, the Ministry of External Relations said in a statement.

Mr Felix Mbayu, the Minister Delegate in the Ministry of External Relations in Charge of Relations with the Commonwealth, said President Biya had considered the “distress of our compatriots and the difficult living conditions in quarantined zones.”

“Fortunately, to date, all of them are in good health,” the statement says.

Early this month, Cameroonians in Wuhan sent a letter earlier appealing to the president to come to their aid in the midst of the coronavirus outbreak. They said the embassy in Beijing had been unhelpful despite their “many approaches.”

On Thursday, the Kenyan government announced it would disburse Ksh1.3 million ($13,000) for the upkeep of Kenyan students in Wuhan in addition to the Ksh500,000 ($5,000) worth of provisions from the Chinese government that was also being processed.

Uganda last week announced it would release $61,000 for its citizens in China.

Meanwhile, a Cameroonian student believed to be the first African in China to be infected with the coronavirus is said to have recovered.

According to reports, Kem Senou Pavel Daryl, a 21-year-old student living in the Chinese city of Jingzhou, recovered and was released from hospital last week, but he remains in isolation.