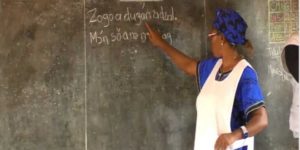 YAOUNDE VOA  | Cameroon is commemorating International Mother Language Day, February 21, by launching what it calls an ambitious program to save its endangered national languages.

The central African state has over 260 national languages, but only 40 are taught in schools. Cameroonians speak mostly French and English, which are foreign but official languages and part of an entrenched separatist conflict that has cost about 3,000 lives since 2017.

Businessman Emmanuel Mbom, 31 years old, says he is satisfied at the progress made by his six-year old son at the school.

“In my situation, my wife and I speak two different languages, native languages so my children try to pick what they can pick,” Mbom said.

Mbom says he is confused about which language to teach his children because his language is Sawa, spoken in the Littoral and Southwest regions of Cameroon, and his wife is from the Northwestern town of Nkambe, where the Limbum language is spoken.

Cameroon’s secretary of state in the ministry of basic education, Asheri Kilo, says she is satisfied with the level of interest the children display at speaking their national language.

“It is very impressive the way the children are taken into learning their languages, and I decided to check how many children are from other regions rather than Yaounde and I figured that there were children from all the 10 regions in Cameroon,” she said.

Cameroon has 260 national languages spoken by an estimated 25 million people in the 10 regions of the country. It is one of the countries the United Nations Educational, Scientific and Cultural Organization (UNESCO) classifies as a distinctive cultural density on the linguistic map of the world.

However, the central African state inherited two foreign languages from its French and English colonial masters as official languages, with 80 percent of the population speaking French and 20 percent English.

Fabienne Freeland, director general of the nongovernmental organization Summer Institute of Linguistics that helps Cameroon in promoting the teaching and learning of its national languages, says the official languages have not been effective tools of communication.

“French and English has its limits on development in this country,” Freeland said. “When there was a cholera outbreak in the far north, it is only when the information started coming in Fufulde that people started changing behavior and the cholera was stopped.”

Cameroon’s national institute of statistics reports that four percent of the central African states’ local languages — including the Mbiame language spoken in the country’s English-speaking Northwest Region and the Ekung language in the South — have disappeared since 1950. Ten percent of the 260 languages are neglected and seven percent are threatened.

Seraphine Ben Boli, who heads the program to promote the use of Cameroon national languages, says a pilot program that is being implemented in the 10 regions of the country to save the remaining mother tongues from disappearing.

She says the ministry of basic or elementary education is experimenting with the teaching of five national languages in 43 schools throughout Cameroon. The languages chosen, for now, are Ewondo, Bassa, Douala, Womala and Fufulde, because of their national popularity. She says apart from the experimental schools, teachers in all educational establishments have received instructions and training to teach Cameroon national languages spoken in the areas where their schools are found.

Boli said Cameroon will decide by 2030 on which of the languages can be used as an official language, added to English and French. She said by so doing, they intend to solve the separatist crisis that has within the past four years claimed at least 3,000 lives just because people are divided as a result of two inherited colonial languages.

Separatists have been fighting to create an English-speaking state out of the French-speaking majority. The separatists say the education, legal system and cultural practices they inherited from their British colonial masters are different from those left by the French, who colonized the French-speaking regions of the country. Cameroon believes by having its own national language as an official language, many of its citizens will feel like Cameroonians, unlike in the past when they considered themselves either French or English.

UNESCO says it celebrates mother tongue day because it believes in the importance of cultural and linguistic diversity for sustainable societies and it is within its mandate for peace that it works to preserve the differences in cultures and languages that foster tolerance and respect for others.