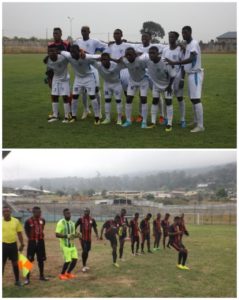 Sunday’s encounter will be the first meeting between HO Academy FC and Continental FA in matchday 5 of the ongoing Southwest Regional League.

Both sides will clash at the Buea Municipal Stadium at exactly 1 PM in what promises to be a game full of fireworks.

Currently sitting at the top of Pool A is Continental FA that has recorded a 100 per cent record in all their three games.

They are the only side that is still unbeaten in the Pool and will be looking forward to maintaining this record.

A win will see them ending the first round of the championship unbeaten and also ensuring they seal their top spot.

However, a defeat will put an end to their winning streak and might jeopardise their chances of securing the first position should Buea United FC beat Prisons FC Buea.

For HO Academy FC, it is a must-win game for them if they are to keep their Mini Interpools hopes alive after their victory against Dynamic FC.

A win will see them ending the first round with six points while a defeat or a draw will be at their deficit.

Both sides played against Dynamic FC with both scoring seven times each but it was HO Academy FC that kept a clean sheet against them as Dynamic scored two against Continental.

The Gra Gra Boys have played two games without conceding, scoring twice while HO Academy FC has conceded just once in their last two scorings seven.