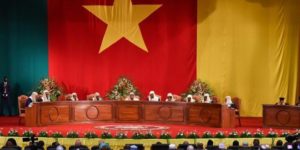 Xinhua  | The ruling Cameroon People’s Democratic Movement (CPDM) has won the Feb. 9 legislative election by an absolute majority, according to official results published on Friday by Cameroon Constitutional Council.

The results were not complete, and involves 167 of the total 180 seats of Cameroon National Assembly. Due to irregularities, 11 constituencies have to rerun the polling to elect the last 13 seats.

According to the results, CPDM won 139 seats, and was followed by its ally National Union for Democracy and Progress (NUDP), which won seven seats.

Main opposition party Social Democratic Front (SDF) that is deeply rooted in crisis-hit Anglophone regions occupied the third position with five out of the 167 declared seats, while it had 18 seats in the ongoing legislation. Another important opposition, Cameroon Renaissance Movement (CRM), boycotted the election citing insecurity in Anglophone regions.

The 11 constituency that will rerun the election are all in the English-speaking part of Cameroon, where armed separatists had vowed to disrupt the election.

Separatist forces have been clashing with government troops since 2017 to create a new nation they call “Ambazonia” in the Anglophone regions, representing about 20 percent of Cameroon population.