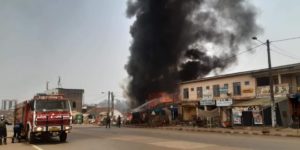 Anadolu Agency  | Tragic event did not raise concern among NGOs, international community to regret of Cameroonians

Cameroon deplored the silence of human rights organizations and the international community following a weekend attack during International Women’s Day celebrations in the northwestern city of Bamenda.

In a statement, a government spokesperson denounced NGOs and other members of the international community, a stance the local press also adopted Monday.

One soldier was killed and seven other people were seriously injured Sunday when separatists set off an improvised explosive device about 100 meters from a grandstand during a parade marking the day, the spokesman said late Sunday.

The injured including five military personnel, two police officers and one civilian.

According to Minister of Communication Rene Emmanuel Sadi, around 50 individuals belonging to the “secessionist terrorist hordes” from the country’s North-West Region entered Galim district Saturday night in a motorized caravan and headed towards the territorial brigade of the gendarmerie and public security post.

Following clashes between the latter and the defense forces, two gendarmes, two police officers and four civilians were shot dead.

“We are astonished by the silence of national and international organizations in the defense of human rights whenever, in the context of the conflict in the northwest and southwest, there are attacks by secessionist armed groups,” he said.

According to Nguini, “the view of these organizations is partial, biased and partisan.”

“If we want to analyze human rights situations in a conflict, we must do so without asking where they come from. We have to take the facts and try to identify the perpetrators,” he told Anadolu Agency.

Regarding investigations into killings often carried out by such organizations, Nguini said they are not always credible, not necessarily well-founded and sometimes full of presumptions and lacking convincing substantive elements that can prove certain facts.

“For example, in the recent events in Ndarbuh, despite Human Rights Watch’s allegations, we still have no substantial evidence presented that the violence committed was the product of deliberate action by the defense and security forces outside of any confrontational situation. They have promised to provide elements that unfortunately are not yet presented.

“In addition, the minority community of Mbororo in the English-speaking area suffered abuses that are not sufficiently covered by those NGOs. And yet, there is real work of ethnic cleansing caused towards this minority by the secessionist forces,” he added.

In order to resolve the so-called “Anglophone crisis” that had been affecting the country for more than three years and in which such violence was being committed, a national dialogue had been organized by the government. Important resolutions had been made, and yet the violence had not stopped.

On this fact, Nguini accused those who are not in favor of appeasement.

“They are committing violence to show that there was no need to organize the great national dialogue. But above all, they want to prove that the results of this dialogue, especially the establishment of a special status for the two English-speaking regions, was not a good thing,” he said.

Although Nguini acknowledged that the situation has not completely changed since that dialogue, he feels that there have been important steps towards appeasement.

To end this crisis, he recommended that the Cameroonian people living in these two regions take a stand in favor of the republic in order to help the defense forces do their job against armed groups.

“However, military and security measures are not enough. It is necessary to continue with institutional measures. In particular, an acceleration of the implementation of all the elements that derive from the special status — this, in order to show that the public authorities are effectively responding to the demand for autonomy expressed by a number of actors in the autonomist movements,” he recommended.

Nguini said he is convinced that if the country moves in this direction, “there will certainly always be violence, but the situation will continue to improve, as is already the case.”