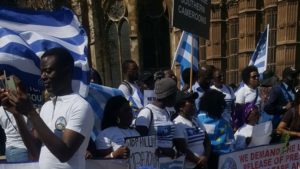 Express.co.uk  | Cameroon protesters could be seen charging police officers in Westminster in an attempt to break fences built to protect the Royal Family ahead of the Commonwealth Service procession.

Queen Elizabeth II was moments away from arriving to celebrate the annual event at Westminster Abbey with the rest of the Royal Family. City of Westminster Police released the following statement: “As part of the policing operation for Commonwealth Day celebrations, officers arrested 2 men at approx 2.20pm in Victoria St, SW1 for breach of Anti-Terrorism Road Traffic Regs (ATTRO).

Both are in police custody. An operation remains in place whilst the celebrations are ongoing.”

The Commonwealth Service at London’s Westminster Abbey is an annual event that this year brings together Harry and Meghan with Queen Elizabeth, his elder brother William and wife Kate, and father Prince Charles and his wife Camilla, for the first time in public since the couple thrashed out an exit deal from their royal roles in January.