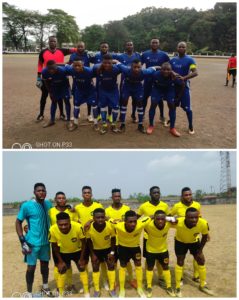 Options Sports Academy will face city rivals LIFCA in what promises to be a cracker in the Southwest Regional Championships.

The two sides will meet for the second round of the championship after the first meeting on January 13 ended 1-1.

This time, they will meet on March 15 at the Middle Farm stadium is a date and venue to keep. To the uninitiated, the day would probably be like any other day in the calendar.

But March 15, to football fans in the Southwest Region, is anything but ordinary. Two giants of the footballing world will butt heads on the football field for the second official time.

Options Sports Academy that was created last year has gone from strength to strength as the days have progressed.

Options SA journey to the summit is proven to be a tough one but to with the vision of their emblematic president Awantoh Henry Neba they are determined to see it realised.

The signing of coach Daniel Walindjom on January 8 has seen an influx of talents.

The club is slowly and steadily building a legacy, the fruits of which can be seen today. President Neba is willing to see that nothing stops Options SA juggernaut.

On her part, LIFCA has been a powerhouse on the Southwest Regional League front for three consercutive years and their pedigree is renowned as they have made it to the Mini Interpools in all these years.

On their to achieving this feat is Options SA that also has her own ambitions as both sides are currently tied on four points each.

Goal difference is what separates these Pool C clubs.

The game is a must-win one as the winner might eventually be the group winner in this pool that is made up of just three clubs.

Two different teams. Two different philosophies. On paper, the match on March 14 is one to pencil in your calendars, but to the Options SA: “The Egyptians we see today we shall see no more”.

There has been so much verbal war between the two sides. President Awantoh after the first game between Lifca said his side was robbed after a late penalty saw them held to a 1-1 draw.

However, this allegation was denied by Lifca’s Scribe Abong Clextus.

At the level of the tacticians, Guy Kamguia has pointed out that Coach Walindjom’s side has packed the bus in the game while Walindjom blames officials for poor officiating.

Excuses will count for nothing when these two sides come face-to-face this Saturday in Limbe.

Players to watch will include Chaibula Ndi, Rijkaard Ngale, Lakem Lane, Yanki Agbor amongst others.