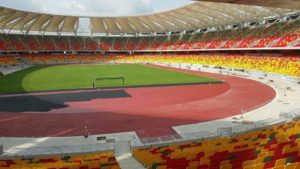 Cameroon’s Japoma Stadium in the City of Douala has won the bid to host the May 2020 CAF Champions League final.

Cameroon will be the first country to hist the final since CAF decided to make the final of the CAF Champions League a one-game affair.

The Japoma stadium won the bid ahead of other stadiums like Mohammed V Sports Stadium in Morocco and Tunisia’s Rades Olympic Stadium.

The final has been scheduled to take place on May 29