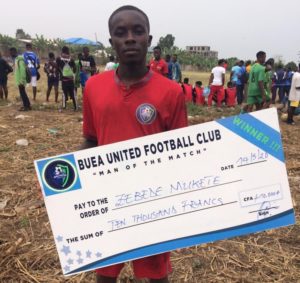 Buea United FC midfielder, Zebedee Mukete was on Saturday, March 14 voted the club’s Man of The Match in their 1-0 defeat to HO Academy FC of Buea.

The young talented midfielder put on a splendid display but it didn’t help his side get the much-needed points in the encounter.

His distance covered, recoveries and creation of chances were some of the qualities that saw him awarded the winner.

He proved in the encounter that he is a workaholic.

Speaking to the press after the award, Mukete said he dedicated it to his teammates and will continue to work harder to see that this award comes alongside victory for his club.

“I am proud to have won this. It is all about effort when one has put his mind to achieving things in life,” he said.

Buea United FC was beaten by HO Academy FC of Buea 1-0 thanks to an early goal scored at the 4th minute of the game.

He promises that they will give their best in their next game to see that they pick three points.

He succeeds Amih Renzo who the award in the previous game.