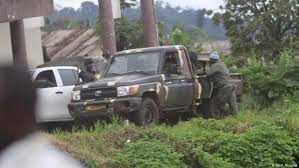 The secretary-general called on other armed groups to do likewise, said Stephane Dujarric, spokesman for Guterres.

The UN chief reiterated his call for renewed dialogue that will address all relevant issues in the Northwest and Southwest regions of Cameroon and that will put an end to the violence and human suffering.

Guterres reiterated the readiness of the United Nations to assist the authorities and the people of Cameroon in that regard, said Dujarric.

Since 2017, separatist fighters in Cameroon have staged attacks in the English-speaking regions in protest of marginalization by the country’s French-speaking majority. SOCADEF is one of such forces.

On Wednesday, the United Nations welcomed the temporary cease-fire announced a day earlier by the Communist Party of the Philippines with the government.

Guterres encouraged the parties to reach a lasting political solution and end this longstanding conflict, said Dujarric on Wednesday.

Guterres on Monday called for an immediate global cease-fire in face of COVID-19.