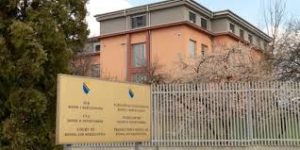 Sarajevo Times | The motion was filed against two suspected Cameroon nationals and the custody was requested because some additional expert analyses of mobile and technical devices are awaited, as well as due to the extraordinary circumstances caused by the COVID 19 pandemic and for the purpose of acquiring conditions for examining witnesses at the Immigration Centre.

The aforementioned suspects are under investigation by the Prosecutor’s Office of BiH relating to the arrival of a larger number of persons from Cameroon to BiH earlier this year, who repeatedly tried to leave BiH in the direction of EU countries via BiH and Tuzla airports, as well as via inland border crossing points, with French documents belonging to different persons.

Smuggled persons were discovered and prevented by police officers of the Border Police of BiH.

The BiH Prosecutor’s Office is conducting an extensive investigation in this case, in which international legal assistance has also been implemented, and the measure of custody has been requested because of the risk of flight of the suspects who would, if they leave BiH, become inaccessible to the judiciary of BiH.

The measure of extension of custody was requested for another three months.