Buea boy and potential Indomitable Lions midfielder, Clinton Elimita Ekole is gradually making a name in Finland has his evolvement in the game continues.

Since moving to Finland in 2018, the former player of Cinyodev FA is progressing in a great manner. This has led to reports in Finland that the Finnish Football Federation is trying to woo the defensive midfielder to play for Finland. However, Elimita came out recently to say he wish to represent his motherland Cameroon instead of Finland.

In a country that is as passionate for the beautiful game as Cameroon, the hunger for success always runs high. In a rebuilding process like that of the Indomitable Lions giving such a lad the chance to represent the country is a well-deserved move.

Elimita is a Cameroonian defensive midfielder who was born on December 24, 1998, in Soppo-Buea, Southwest Region of Cameroon. His workaholic nature and endless energy on the pitch saw his former teammates and childhood friends nicknamed him “Commando”. On July 1, 2012, the talented box to box midfielder joined local side CINYODEV FA at the age of 16. 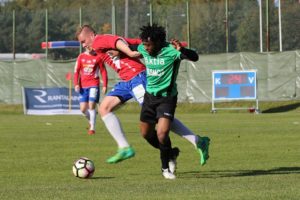 Despite his young age, he made a couple of appearances with the club’s senior side in the Southwest Regional League and other competitions. Before leaving to pursue the game abroad, Elimita also represented Cameroon at the Under 17 level.

After a few years with CINYODEV FA, he travelled to Hungary for trails in 2017. However, just like any African player moving to Europe for the first time in winter, it wasn’t an easy one for Elimita. He failed to impress. Knowing the talent in the youngster, his agent will secure him a trail with Finnish Fouth Tier side FC Kontu. He will, later on, join the side to continue his footballing journey.

He will go on to make a total of 15 appearances scoring two goals and been shown two yellow cards. In all, he played a total of 1189 minutes in that season. That same season his contribution-four goals and 6 assists saw them crowned champions of the Helsinki Cup.

In all, Elimita has played a total of 630 minutes-five games in the Finish domestic cup and 1189 minutes in the Kolmonen Helsinki Group 2 championship.

This performance will see bigger clubs in the Finnish championship after the player’s signature. On March 15, 2020, he signed a contract with Third Tier side FC Espoo. However, the outbreak of the novel coronavirus pandemic has not allowed the Buea Boy to make his official debut with his new side. With football in Finland set to restart on June 13, it will be a delight for Elimita to win the hearts of FC Espoo fans. 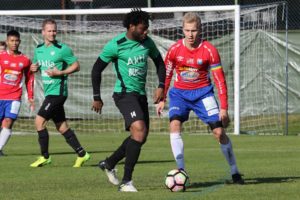 Elimita is a typical box-to-box midfielder but he can also play as a defensive midfielder or an attacking midfielder. This versatile nature has seen him used at times as a right-back or a centre back. He is very vital in transporting the ball during attacking manoeuvres and in recovering the ball in defensive situations.

He is known for his acceleration, tactical discipline, positional selection, football intelligence and endless energy. As a defensive midfielder, his duties revolved around protecting the back four, breaking up and dictating the play.

He acts as a deep playmaker and phenomenally destroys the opponent’s attacks and dictates the pace of his team. He also has a great off the ball movement and ability to read the game. He is a very neat and tidy player, who likes to play a lot of quick, short passes, often keeping things simple and playing one or two-touch football.