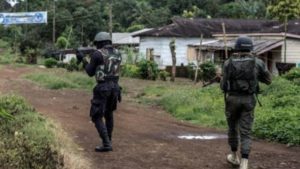 Human Rights Watch  | – Cameroonian armed forces have attacked a health facility in the North-West region and arbitrarily arrested seven health workers in the South-West, while armed separatists have killed at least six civilians, including a humanitarian worker and a teacher, since May 2020.

The violence took place despite peace talks between the government and jailed leaders of the Ambazonia Interim Government (IG), a separatist group, on June 16. Other separatist groups, such as the ‘Ambazonia Governing Council’ and a splinter faction of the IG did not participate.

“The talks between the government and separatist leaders should include ensuring respect for human rights and accountability for abuses,” said Lewis Mudge, Central Africa director at Human Rights Watch. “All parties to the talks should publicly commit to immediately end abuses against civilians and ensure that victims of abuses have access to effective remedies.”

Human Rights Watch has previously called for individual sanctions on members of the military and separatist groups responsible for grave abuses in the Anglophone regions.

Based on information reported by the media and nongovernmental organizations, Human Rights Watch estimates that at least 285 civilians have been killed in about 190 incidents since January 2020 in the North-West and South-West regions, where violence has been acute since late 2016, as separatists seek independence for the country’s minority Anglophone regions. Human Rights Watch has not been able to independently verify each case since January 2020. Violence has also displaced tens of thousands of people in the past two months, adding to the hundreds of thousands who have fled their homes since the conflict began in late 2016.

Security forces and armed separatists have both attacked hospitals and medical staff on multiple occasions. On July 6, separatists killed a Doctors Without Borders community health worker working for in the South-West region, after accusing him of collaborating with the military. Security forces damaged a health facility in the North-West region on June 30 and arbitrarily arrested seven health workers in the South-West region on July 6.

On June 10, at 2 p.m., following clashes between separatists and soldiers, including some from the Rapid Intervention Battalion (BIR), a grenade was fired into the courtyard of the district hospital in Bali, North-West region, leading to the death of one cardiac patient, injuring at least four others, and destroying four vehicles. Human Rights Watch spoke to two medical staff and three Bali residents and reviewed a letter sent by the hospital director to the health minister, the Bali military commander and the separatists’ commander describing the attack.

The Bali military commander paid 50,000 XAF (US$86) to the hospital for damages. This is not the first time that this particular hospital has been targeted in fighting between separatist fighters and Cameroon armed forces. In 2018, separatists looted hospital supplies. In July 2019, a grenade, allegedly fired by the military, injured a patient and destroyed the roof. In January 2020, soldiers forcibly entered the hospital looking for wounded separatists causing panic among patients.

Separatists killed at least six civilians since mid-May, including a 58-year-old teacher working at the University of Bameda in the North-West region on May 17.

A family member of the teacher told Human Rights Watch that separatists had repeatedly threatened him to make him stop teaching, considering him a traitor for not complying with their demands to boycott schools. The teacher told the separatists that he needed to work to make a living, so they instead demanded money, which he could not pay.

A witness to the killing said that he saw two separatist fighters approach the teacher as he was leaving his home and shot him three times. “I was standing nearby,” the witness said, “The Amba [armed separatists] came on a motorbike and said to him, ‘You are stubborn. Your end has come.’ Then, they shot him once in the head and twice in the chest. He fell on the ground in a pool of blood.”

Since 2017, armed separatist groups have waged a violent campaign against education, enforcing a boycott of schools in the two Anglophone regions to protest against what they consider educational injustices against English-speakers. They have regularly targeted school buildings, burning and damaging scores of schools. They have killed, kidnapped, and maimed students and education officials for not complying with their demands to keep schools shut. They have used schools as bases, deploying fighters and weapons in and near them and torturing hostages in classrooms.

Separatists have disrupted normal life in the areas they control by enforcing prolonged lockdowns, calling strikes, and building roadblocks that are affecting the delivery of humanitarian assistance. The United Nations Office for the Coordination of Humanitarian Affairs (OCHA) reported that separatists’ roadblocks are hindering the transport of medical supplies to the Banso Baptist Hospital in Kumbo, a key facility for tens of thousands of people in one of the areas most affected by violence in the North-West region.

In July, Human Rights Watch contacted representatives of three separatist groups, the IG, led by Sisiku Julius Ayuk Tabe, its splinter faction, led by Samuel Ikome Sako, and the ‘Ambazonia Governing Council.’ All denied that their fighters had committed any of these abuses.

“Cameroon’s international partners and the UN Security Council should help civilians in the Anglophone regions who are facing violence on a daily basis, and demand government forces and separatists stop attacks on civilian targets,” Mudge said. “They should impose targeted sanctions, including travel bans and asset freezes, on separatist leaders responsible for abuses and consider the same for government forces involved in abuses.”

Violent attacks against civilians in Cameroon by separatist groups have been rife since the crisis started in late 2016 in the North-West and South-West regions of the country. Human Rights Watch has documented widespread kidnapping, torture, and killings of civilians as well as destruction of property, by separatist fighters since 2018. Armed separatists have also killed hundreds of members of security forces amid growing calls for secession of the Anglophone regions. Government forces have also committed serious human rights violations including unlawful killings, destruction of property, sexual violence and torture.

In March 2020, the Southern Cameroons Defence Forces (SOCADEF), a separatist group, called for a ceasefire as the Covid-19 pandemic was declared – a move welcomed by the UN secretary-general’s spokesperson. On June 16, government officials held peace talks in the capital, Yaoundé with the leaders of the IG, a major separatist group, led by Sisiku Julius Ayuk Tabe, currently jailed in a high security prison in Yaoundé. Neither the call for a ceasefire nor the peace talks have led to an end to violence against civilians.

On May 16, armed separatists killed a 48-year-old businessman in front of his shop in the Azire neighborhood of Bamenda, accusing him of collaborating with government security forces. Human Rights Watch spoke to two witnesses and two family members of the victim. “Two young separatists arrived on a motorbike,” one witness said. “They stopped in front of his shop and called him. As he walked out, one of them shot him in the stomach three times.” The victim’s wife said that the separatists had warned her husband several times not to provide information to the security forces, including hours before his death.

On May 30, separatists kidnapped and tortured a humanitarian worker in Bali, North-West region, also accusing him of collaborating with the security forces. They released him the following day, and he spent several days in a Bameda hospital being treated for his injuries during the episode:

They blindfolded me and took me to their camp on a motorbike. They asked me questions about my work and threatened to kill me. Late in the evening, they took me to another place, in the bush. They tied me on a tree with a rope and started to beat me savagely. They slapped me several times, kicked me and poured water on me. It was dark, I was scared. I was in pain. I feared for my life.

On June 18, separatists killed a 44-year-old man at Ntarinkon market in Bamenda, North-West region, after he refused their demands for money. Human Rights Watch spoke to three family members and three witnesses to the killing. One witness, a 36-year-old man, said:

I was drinking at a bar, about 15 meters from where he was shot. Everything occurred in front of my eyes. The Amba [separatists] came on a motorbike. The one sitting in the back shot him two times in the head. Then, they escaped. People at the market ran away in fear and panic. The market was later closed down.

Family members said the separatists had repeatedly threatened the victim and asked him for money. The victim’s family filed a complaint with the police days after the killing but there has been no progress on the case.

On June 12, separatist fighters attacked gendarmes and policemen at a checkpoint in Bamenda, North-West region, killing two civilian men. Human Rights Watch spoke to two witnesses to the attack and three of the victims’ family members.

A 26-year-old witness said that about 10 armed separatists attacked the security forces on foot as they were checking identity cards at a checkpoint in Alakuma junction between 10 and 11 a.m. “I was standing about 50 meters away from the scene,” she said. “They caught the gendarmes and policemen by surprise, started firing and killed two men whose documents were being checked by the security forces. The gendarmes and policemen shot back, and people ran away.”

They fired three gunshots and broke down doors to the hospital’s wards, causing panic among patients, nurses, and other workers who fled.

A nurse who was there said:

They forced themselves into the hospital and scared patients with their guns. They also entered the operation theater where doctors were operating a patient. They questioned the patient and asked him why he had been wounded in the shoulder. The medical staff managed to push them back, but this is shocking and unacceptable. Medical facilities cannot be targeted like this.

This is the second time the military has forcibly entered the hospital in search of wounded separatists. On February 17, 2019, soldiers broke into the hospital, fired several shots into the air, and threatened to kill a man in front of hospital staff.

On July 6, security forces, including gendarmes, policemen, and military, carried out a security operation in Mamfe, South-West region. They searched homes and other premises and detained over 60 people. Five residents told Human Rights Watch the operation was conducted after pamphlets were seen in town claiming to represent the ‘Red Dragons,’ an armed separatist group, asking people to contribute 15,000 XAF ($26) to buy weapons and ammunition.

Security forces held the people at the police station in Mamfe, releasing all but 10 that evening. Among those not released were seven staff members from the Baptist Health Center. They were charged with “failure to report separatist activities” before the High Court in Mamfe on July 8. They pleaded not guilty and were granted bail, with another hearing scheduled for July 29.

“Some of our staff were arrested while wearing their medical uniform,” the Baptist senior representative said. “It is unacceptable that health workers are being treated this way. They have nothing to do with the Amba boys [separatists] and are on the ground to assist the most vulnerable, especially in these challenging times where the Covid-19 pandemic poses a serious threat to our country.”

The lawyer representing the seven staff members said that, while at the police station, they were forced to sign statements they were not allowed to read. “Some signed out of fear of the police, others were actively intimidated into signing,” he said. “The police did not even read the statement to them.”