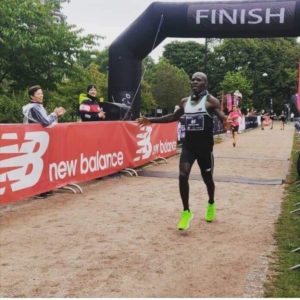 Cameroonian athlete and three times Mount Cameroon Race of Hope winner, Eric Mbacha Mangeh is the winner of this year’s edition of the Helsinki Marathon in Finland.

The renowned Cameroonian athlete did the 42 km race in a time record of 2 hours, 24 minutes and 40 seconds. He finished some six minutes before second-placed, Finnish Oscar Holmström could cross the finish line after 2 hours 30 minutes and 45 seconds. The third place will be occupied by Theodoros Antonatos from Greece using 2 hours 32 minutes and 38 seconds.

The international marathon took place on Saturday, August 22, 2020, in the Finish capital of Helsinki.

The 36-year-old athlete is the first Cameroonian to win the Helsinki Marathon and one of a few to have excelled out of the country. Mbacha who had missed the 2020 edition of the Mount Cameroon Race of Hope due to threats from Separatist fighters had been in Finland since then. The newly crowned champion took to social media to share his joy after winning the marathon.

In an interview granted Athletsphere, Eric Mbacha said he has given way to the young ones as far as the Mountain Race of Hope is  concern. His dreams are now to focus on the marathon as he prepares for retirement.

“I will like to thank God for this victory and am happy to win out of homeland especially in Europe.”

He goes further to explain why many Cameroonian athletes after winning the Mountain Race of Hope had failed to shine at international marathon competitions.

“There is a very big difference between the Mount Cameroon Race of Hope and marathon competition. With the mountain race, you climb and descend and at some points, you can walk. However, with the marathon, it is constant speed.

Eric Mbacha has participated in the Mount Cameroon Race of Hope 18 times. He won it in 2011, 2014 and 2019. He has also been second three times and has occupied the third position on three occasions.

As the winner of this year’s edition, the native of Nkambe in the Northwest region of Cameroon bags home circa FCFA 2.2 million (€3,500).