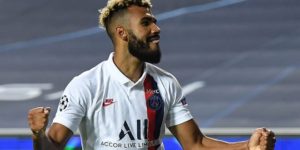 Paris Saint-Germain are set to make a U-turn and offer Eric Choupo-Moting a new deal after his contract ended in August.

Le 10 Sport claims the French champions are looking to hand Choupo-Moting a new one-year contract in order for them to save money.

The Cameroon forward moved to Paris from Stoke City in 2018 and he scored two crucial goals that secured PSG’s 2-1 victory against Atalanta in the Uefa Champions League quarter-final.