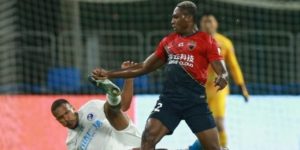 AFP  | Cameroon forward John Mary and his club Shenzhen FC alleged on Saturday that he was racially abused during a Chinese Super League match against Shanghai Shenhua.

Mary alleged that the abuse came from the Shenhua bench and Shenzhen have made a complaint to the Chinese Football Association, a source said.

The 27-year-old striker told AFP that the incident, which allegedly took place during Friday’s 0-0 draw in Dalian, was “disgusting”.

Mary was sent off in the 91st minute after remonstrating with the Shenhua bench. Shenzhen hope the red card will be overturned.

“I’ve been insulted because of what I am, being a black man,” said Mary, who had spells in Thai, Serbian and Slovenian football before moving to China with Meizhou Hakka in 2018.

“Tell me how would you feel if you are a black person and you are being insulted like that?” asked the forward, who has hit six goals in nine CSL matches this season.

Mary, who played for Cameroon under-20s, looked shocked when he was sent off and his team-mates could be seen pointing towards someone or some people off the pitch.