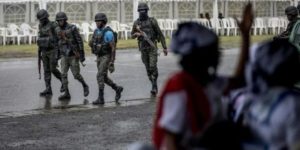 (Reuters) – Cameroonian soldiers raped at least 20 women and killed a man in a raid on a village last year, Human Rights Watch (HRW) alleged on Friday, calling it one of the worst attacks by the army since an insurgency by Anglophone separatists began in 2016.

Witnesses told the New York-based rights group that the attack on March 1, 2020, was a reprisal against civilians in the western village of Ebam suspected of collaborating with rebels seeking independence from the mostly Francophone state.

“We have better things to do than react to this report. Human Rights Watch is clearly complicit in the terrorists’ atrocities,” said Colonel Cyrille Atonfack, referring to the rebels.

The conflict between state forces and rebels demanding independence has killed more than 3,500 people and forced 700,000 from their homes, researchers say.

Rights groups accuse both sides of committing atrocities. While the government typically dismisses these accusations, it has, in a few cases, subsequently arrested soldiers and accused them of being involved in killings and torture.

News of the attack in Ebam has been slow to emerge due in part to stigma and fear of reprisals, HRW said in a report, adding that the incident suggests sexual violence is much more pervasive in the conflict than has been documented.

The group said it conducted interviews with 20 rape survivors as well as multiple other witnesses, a doctor who screened the survivors, aid workers and U.N. officials with knowledge of the incident.

The witnesses said more than 50 soldiers entered Ebam at around 3 a.m. and broke into nearly all 75 houses in the village, stealing money, assaulting women and rounding up the men.

“The military asked me and other villagers: ‘Where are you keeping the amba (separatists)?’” one of the victims told HRW. “They said: ‘The next time we come here, we’ll shoot everyone if you don’t show us the amba now.’”

One man was also killed after being transferred to a nearby military base, the report said.