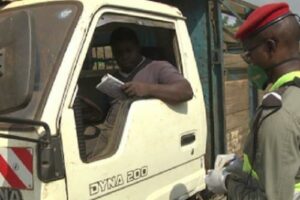 (Business in Cameroon) – In the early hours of November 22, 2021, checkpoints were deployed throughout  Cameroon to make sure drivers have effectively paid their vehicle stamp duty, counting for the current budget year. According to a note the Director-General of Taxation sent to his collaborators on November 15, 2021, in preparation for the checks,  those controls will run until December 11, 2021.

As a prelude to this forced collection operation, on November 19, 2021, Minister of Finance Louis Paul Motazé signed a communiqué inviting drivers who have not paid their vehicle stamp duty to immediately get in touch with insurance companies to regularize their situation.

He reminded that under the General Tax Code, drivers who fail to do so are liable for a 100% tax penalty, a criminal fine, and car impoundment when caught during official checks.

In January 2017, Cameroon entitled insurance companies to collect vehicle stamp duties on its behalf. Car and bike owners pay that tax when subscribing or renewing the mandatory third-party insurance.

According to the Directorate General of Taxation, revenues from that duty were boosted thanks to the reform. Nevertheless, the reform has raised other problems. For instance, in 2020, the directorate in charge of insurance matters at the Ministry of Finance presented a mitigated review of the reform.

It explained that insurance companies do not return the counterfoils of insurance certificates provided to them by the Public Transport Passengers’ pool (PTP) and they do not even pay the amounts equivalent to those certificates to the pool.  Every year, they only return 14% of the certificates they have received, “keep the remaining 86% and order new ones without even detailing how they used the ones they previously received,” the department indicated.