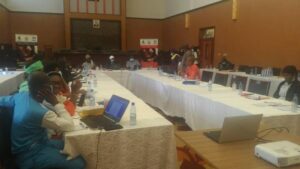 Stakeholders involved in the fight against drug consumption have pledged to harness more efforts to curb the proliferation and consumption of chicha among youths which is increasingly on the rise.

Meeting last weekend for a workshop of actors in tobacco control,  discussions were focused on ways to discourage the consumption of tobacco and its derivatives.

The workshop, organized by the National Drugs Control Committee in collaboration with the World Health Organisation brought to the fore an intense debate on the control of the consumption of chichi especially among youths.

Discussions focused on both the taxation of the material and the components of this tobacco derivative of tobacco.

Participants said above the difficult control of this product, there is the problem of compounds absorbed by its consumers and which are both strange and even overdosed mixtures. During the discussions, it was recalled that the puffs of smoke from this product are 3 to 4 times more harmful than those from conventional cigarettes with the risk of cancer even higher. Thus, regulations, identification of places of consumption of these products, etc. were strictly taken into consideration during discussions.

Presiding over the workshop, Boukar Oumate, Head of the Legal Affairs and Litigation Division at the Ministry of Public Health recommended a multisectoral meeting be convened to examine in depth the issue which has become a real danger for the youth.

What taxation to recommend to discourage the consumption of tobacco ?

Discussions at the workshop were also focused on the type of taxation and the structure of the taxation of tobacco products capable of reducing the volumes imported or produced locally and, in turn, reducing consumption. An inventory of the situation was visualized through the data collection survey on aspects of the economy, taxation and trade carried out by Thierry Germain Etoundi, consultant to the World Health Organisation.

The results of this survey indicated that 35 brands of cigarettes are in circulation in Cameroon with an almost identical price practice. While the majority of cigarettes are imported, there are however three local tobacco industries. It emerged that the rate of excise duty is 30% and that the share of illicit trade is 20%.

A TaxSim model was presented to put all participants at the same level of understanding. It was then that the debate opened by the representative of civil society organizations Prince MPONDO dwelled on the structure of the taxes applied to tobacco by insisting on the option of a specific tax. Arguing that taxation is only effective if it is backed by the sale price. The representative of the Directorate General of Taxes on his part noted that the increase in the excise tax on tobacco has been regular since 2007 until 2019, starting from FCFA 2,600 to FCFA 5,000  for 1,000 stems. And since 2020, the tax rate has been raised to 30%, still far from the 70% recommended by the WHO. The representative of the Directorate General of Customs indicated that the choice of a specific tax is certainly interesting, but hinted this approach could strongly encourage smuggling and counterfeiting.

Thus, participants warned any tax solution must be accompanied by a mechanism to protect the economy through a multisectoral approach.